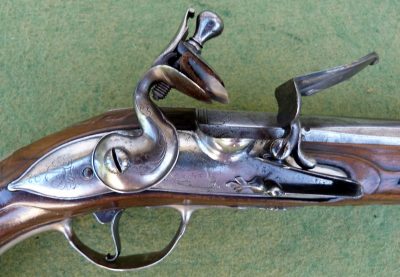 Each pistol with 10 inch swamped two-stage barrel with turned ring at the girdle, octagonal breech becoming polygonal, signed along the top flat and engraved with line borders along the angles, the rear of the breech with a band of engraved foliage, border engraved tang, rounded lock with moulded border, signed within a foliage cartouche, a shell above, and with a scallop shell and line of graduated spheres at the tail, foliate engraved rounded cock and chiselled steel, figured moulded full stock carved with foliage around the barrel tang, cast and chased silver mounts comprising foliate side-plate involving a grotesque mask, vacant foliate escutcheon, pommel with unusual grotesque mask cap within borders of ropework and foliage, the spurs engraved with graduated beadwork, trigger-guard with foliate finial and engraved with a flower head on the bow, turned baluster ramrod-pipes, the rear one decorated en suite with the trigger-guard, original iron-capped wooden tipped ramrod with iron worm, London proof marks and unidentified barrelsmith’s mark, a crowned ‘G’.

Note: Peter Boulton was apprenticed to his father William in 1680. In 1700 he was fined by the Gunmakers’ Company for giving ‘the Master opprobrious words with threatening to Post him up a Coward at the Exchange if he did not fight him’. He was fined again for assaulting the Master in 1702, however this did not prevent him from being elected assistant and then Master in 1710. He was Gunmaker to Ordnance between 1688 and 1715, and to the east India Company between 1698 and 1721.