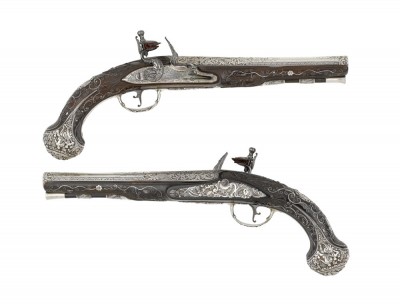 With 8 inch swamped solid silver barrels each signed along the top flat and chased in bas-relief over most of their length with rocailles and foliage against a punched ground, the decoration including a trophy of arms and an arcaded border along each side from mid-point to the muzzle, gold-lined touch-holes, iron tangs engraved en suite with the barrels, rounded silver locks each with slender raised border and lip around the pan, fully hallmarked on the inside and signed within a foliated rococo cartouche on the outside, the tails engraved with a trophy of arms, engraved iron safety-catches, cocks and steels chiselled and engraved with foliage, the cocks also engraved on the back of the comb and on the top jaw, the steels each with roller bearing on a steel-spring with small acorn finial, engraved with a border of beadwork around the pan-covers and chiselled with a shell at the top, moulded figured full stocks carved in relief with shells, foliage and a trophy of arms at the barrel tang and inlaid with silver wire scrollwork and engraved silver flower-heads, the back of each butt  inlaid with an engraved silver classical trophy below a small basket of flowers, the fore-ends cut with a double line border along each side and carved in relief with foliage and shells behind each rear ramrod-pipe, silver mounts in the French taste, cast and chased in relief with shells, scrolls, flowers and foliage, all on a fishroe ground and comprising shaped solid side-plates, escutcheons involving swags centred on a sacred heart and surmounted by a basket of flowers, spurred pommels inhabited by birds and with Diana and Actaeon on each side, both in Classical costume and in a landscape, ovoidal pommel-caps each centred on an eagle, trigger-guards, and gadrooned ramrod-pipes, scrolled triggers with a further scroll at the back, and original silver-tipped ramrods each with iron worm. Tower private proof marks, Heylin’s barrelsmith’s mark, London Silver Hallmarks for 1768 and Maker’s Mark of John King

Provenance: Probably presented to Sir John Rushout on his retirement from the House of Commons in 1768
Sir John Rushout, 4th Baronet of Milast (1685-1775) was educated at Eton before going on to serve as a captain in the Horse Guards between 1710 and 1712. In 1713 he was elected to the House of Commons as a member for Malmesbury, a seat he held until 1722 when he was returned for both Malmesbury and Evesham, choosing to sit for the latter and serving until his retirement in 1768. During his time in Parliament he served as Treasurer of the Navy from 1743 to 1744, when he was made a Privy Counsellor. In 1746 he nearly became Leader of the House of Commons under the Earl of Bath, but the ministry collapsed and he was never offered the position. He became Father of the House in 1762, retiring at the dissolution of Parliament in 1768, the year these pistols were made, having served for fifty-five years.
By family descent until sold in the house sale at Burford House, near Tenbury Wells, Worcestershire, in March 1951.

Note: Only a very limited number of firearms with silver barrels are recorded. Two pairs of half-stocked silver-barrelled pistols were made in the Lucknow Arsenal in about 1785 and both are decorated in almost identical fashion to this pair. They are described and illustrated in Howard L. Blackmore, ‘General Claude Martin, Master Gunmaker’, The Canadian Journal of Arms Collecting, vol. 27, no. 1 (February 1989), respectively p. 10 and p.11, pls. 10-11 and 12-13.