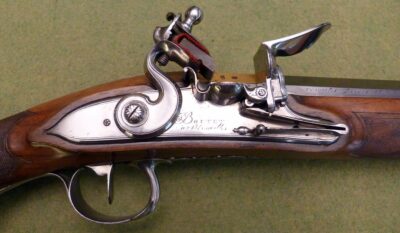 With 15 ¾ inch three-stage blued flared barrel decorated in gold with an urn and scallops at the breech and struck with a series of six maker’s stamps to include NB, LG, BOUTET and Boutet’s monogram, transitioning from octagonal to polygonal to round, signed Boutet Directr. Artiste No. 317 on the right and Manufre. à Versailles on the left of the breech, the polished tang border engraved and decorated with flowers, border engraved stepped and signed polished lock with scarce patent roller frizzen which swings out to reveal a safety cover to the pan, full stocked (some repairs), raised cheekpiece with central roundel carved with a flowerhead, finely chequered fore-end and wrist, ornate polished and faceted mounts decorated in the classical manner, bone tipped ramrod.

Notes: Nicolas-Noel Boutet (1761-1833), French gunsmith and bladesmith to the French Royal Court and later, after the revolution, “Directeur-Artiste” (director and chief designer) for the newly formed arms manufactory at Versailles. There he made regulation weapons for the French military but was also charged with making presentation weapons for Senior officers and foreign dignitaries. Boutet made guns for Napoleon’s own personal use and his remit was “to surpass everything else ever made and to reach a level of perfection that foreign countries will despair of”. This is a very rare example of his work as it was highly unusual for the Versailles manufactory to produce blunderbusses. For a similar example and more imformation see Peter Finer’s 2007 Catalogue, item 31. Examples of Boutet’s work can be found in the Metropolitan Museum, The Royal Collection Trust, The Victoria & Albert Museum and The Royal Green Jackets (Rifles) Museum. The markings on the breech suggest that this piece pre-dates 1814 and bears the Liege variation for barrel proofing mark.