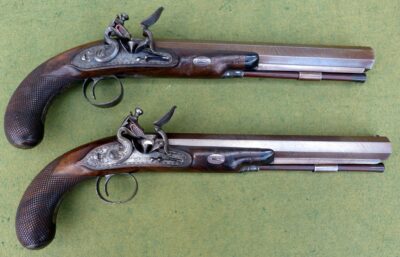 The Barons Suffield, Gunton Park, Norfolk and probably included in the house sale conducted by Irelands, 17 September 1980.
Originally owned by William Asheton Harbord, 2nd Baron Suffield (1766-1821) or his brother and successor Edward (1781-1835). The former served as Lord Lieutenant of Norfolk between 1808 and 1821. The latter represented Great Yarmouth and Shaftsbury as a Whig MP. In 1819 he declared himself a Liberal at the public meeting held at Norwich to petition for an enquiry into the Peterloo massacre. On succeeding his brother as third baron he supported Liberal measures with much earnestness in the House of Lords. He framed a bill for the better discipline of prisons, the chief clauses of which were adopted in the new law on the subject passed in 1824, and he secured a relaxation of the Game Laws, and the abolition of spring guns. From 1822 onwards Suffield, persistently, and almost single-handedly, advocated in the House of Lords the total abolition of the slave trade, and sat on numerous committees of inquiry appointed by the House. He lived mostly on his estates in Norfolk, where he was known as a good landlord and allotted land to his cottagers. His love of athletics made him generally popular, and he established the Norfolk Cricket Club. He died from the effects of a fall from his horse on Constitution Hill, at his London house in Park Place on 6 July 1835.