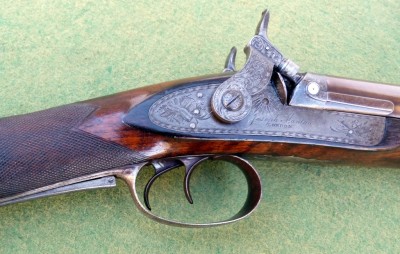 Provenance: Neal and Back’s book, The Mantons: Gunmakers, describe this gun from the records as a double barrel 16-bore shotgun with 30in. barrels inscribed JOSEPH MANTON HANOVER SQUARE LONDON’, tubelocks of Joseph Manton patent, a grip safety device and barrels forged by William Fullerd. The gun was noted as being in the possession of James Purdey & Sons Ltd.
As both guns serial numbers appear genuine, it is possible that there was a duplication at the time of manufacture.