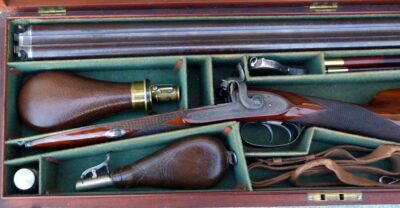 With 30 inch browned sighted twist barrels inscribed “TRULOCK & HARRISS 9 DAWSON St DUBLIN” on the rib, engraved at the breech which has platinum lines, finely engraved tang, signed case hardened locks finely engraved with scrollwork and game scenes, highly figured walnut half stock chequered at the wrist and fore-end, blued trigger plate extending from the bottom of the grip chequering through the fore-end to form the ramrod entry pipe engraved in its entirety with scrolls foliage and ropework, the blued trigger guard bow finely engraved en suite and with a pointer, blued butt plate finely engraved on its tang and carrying the presentation inscription which reads: “ This Gun belonged to his Royal Highness the Prince Consort and was given to Henry Lawley by Queen Victoria, 12th June 1862”, original brass mounted ramrod with capped charge extraction screw: contained in its original mahogany case with accessories including a silver capper engraved with Prince Albert’s coat of arms, a rare brown leather covered Sykes patent powder flask with tip-up measure, shot flask, oil bottle, spring cramp, cap tin etc. The gun retains most of its original finish and appears to have seen very little use.

Notes: His Royal Highness Prince Albert was born in 1819 and died on 14th December 1861 after a long recurring illness (probably typhoid). He married Queen Victoria in 1840 and was a renowned sportsman. It is possible that this gun was a gift from his wife. E. Trulock & Son were awarded a Prize Medal at the Great Exhibition of 1851, which was strongly supported by Prince Albert. Henry Lawley was one of Price Albert’s physicians. There is a file included which contains further notes, newspaper cuttings and a piece of “Gold Lace from Prince Consort’s trousers”.