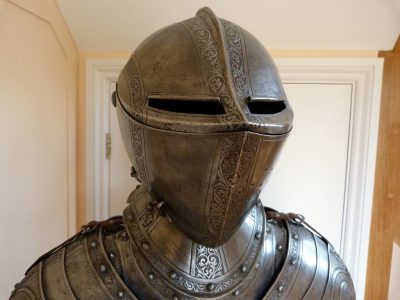 Of excellent workmanship, comprising close helmet with rounded skull formed in two pieces joined along the crest of a low medial comb and fitted with visor, upper bevor and lower bevor attached to it by common pivots with dome-heads, the forward-sloping visor pierced at its front with a centrally-divided vision-slit, the upper bevor of blunt prow-shaped form, the upper and lower bevor in each case fastened at the right side by a swivel-hook and pierced-stud, the lower edges of the skull and lower bevor flanged outwards in each case to receive a single gorget-plate; collar of a single plate front and rear, the former descending to an obtuse; breastplate of deep-bellied fashion formed of a main plate and an upward-overlapping waist-lame flanged outwards at its lower edge to receive a fault of one lame fitted to either side of a semi-circular cut out with a pair of straps supporting a pair of pendent tassets each of nine lames terminating in winged poleyns of three lames; backplate formed of a main plate and an upward-overlapping waist-lame flanged outwards at its lower edge; large symmetrical pauldrons each of even lames overlapping outwards from the third and connected by turners to fully articulated tubular vambraces with winged couters of three lames open at the insides of the elbows; right gauntlet with flared and pointed cuff closed at the inside of the wrist by an overlapped and riveted join and fitted with three metacarpal-plates and a knuckle-plate, the latter decorated with a transverse roped rib, fitted at its front edge with a hinged thumb-defence of five scales, and shaped at its distal end to receive scaled finger-defences now represented only by detached fragments; and tubular greaves attached by rivets to the poleyns, and in each case fitted at the rear with a separated articulated heel-plate, and at the front with an integral broad-toed sabaton of five lames overlapping outwards from the fourth; the main edges of the armour formed with plain inward turns, and the secondary edges bordered by single incised lines, the whole etched in bands and borders on a plain blackened ground with foliate scrolls, symmetrical in the bands and asymmetrical in the borders, and in cartouches on the fronts of the pauldrons with similar ornament encircling in one case a representation of St George and the Dragon, and in the other an armoured figure possibly representing St Joan. With stand 5ft 8? tall.