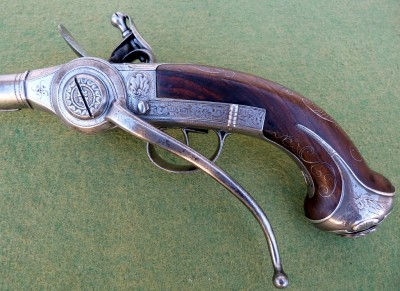 The “Lorenzoni” system originated in Italy in the seventeenth century and was copied by several gunmakers. Made to fire seven shots, loading, priming and cocking the lock by moving the side lever, it is very ingenious. However the lack of a completely gas tight seal between the breech and the powder magazine meant that the danger of the pistol blowing up increased when the mechanism got dirty after a few shots. Not many examples have survived but great credit is due to the skill and workmanship of the maker.